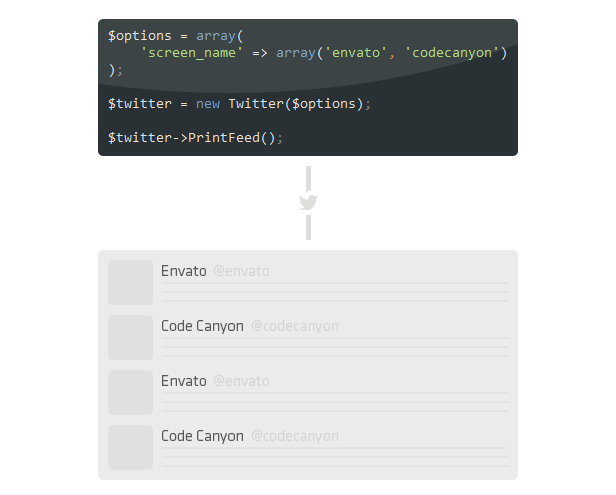 This class eliminates common difficulties when trying to display Tweets on your website or web application. Most methods of loading Tweets are effective, but unfortunately limited when it comes to customization. With this class, you’re able to design your own feed. With a little bit of pre-existing knowledge of HTML you’re also able to create your own format without editing any code in the class.

With over 30 options to choose from, and a custom formatting feature this class has endless possibilites.

This class caches feed data to save bandwidth for both you and Twitter, resulting in faster load times.

Methods used in this class have been proven to be faster than most traditional methods. Efficiency is key when running a successful website.

Implementation of this class is a breeze. Don’t hassle with getting things to work when it only takes a couple steps to install.

Detect Emoji characters made popular on mobile devices such as iPhone or Android and replace them with their respective icon viewable on web.

Use Twitter’s search API as well as many other endpoints such as user favorites.

Display multiple screen names in a single feed. The class automatically puts the tweets in chronological order. This applies for any endpoint that supports it, such as Search.

Added support for extended tweet mode. If you don’t see pictures displayed, make sure the option tweet_mode is set to extended.

More Details
About US